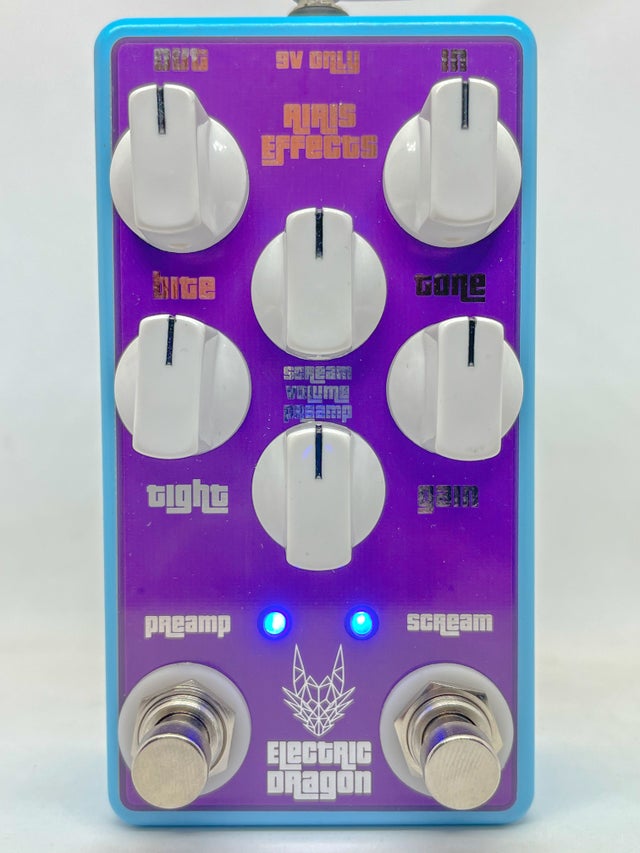 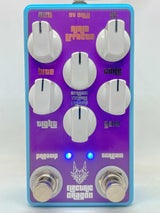 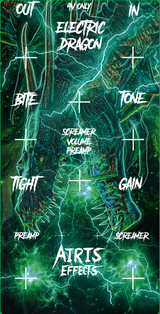 Current Build Time is 1 Week while they last! (Original ONLY)

Special Treat: We added a preorder option for the new version. There are ZERO, repeat ZERO changes to the tone. The changes are only aesthetic. ETA is currently early February.

What do you get when you combine a tubescreamer based circuit and a TC Integrated Preamp based circuit? You get the Electric Dragon! Typically one or the other is the perfect pairing for certain amps, but why not have both in one? Both halves can be used independently or stacked, so it's essentially two full pedals in one. The tubescreamer side has also gotten a heavy dose of "Airis" as it has the Klon style power supply and buffers.

Part of what makes the TC Pre fantastic is in the power supply section. Providing a very Klon-like bi-polar +18volt/-9volt setup, it adds the most clarity and headroom possible. Far superior than just running 18volts into a pedal that doesn't need it. To make the Electric Dragon scream a little louder and clearer, this same power supply is feeding the Screamer side of the pedal. So don't run more than 9volts into it. The pedal will take care of everything else. Except playing the guitar for you unfortunately. (that one is still in development)

Volume: Each half of the pedal features it's own independent volume control.

Gain: At minimum, this will make the pedal essentially a clean mid boost. Turning it up will add some dirt, saturation and crunchiness.

Bite: This is where the bulk of the treble control comes in. Crank this up to get an insane amount of pick attack, crunch and bite. Too high will get noisy though as it's heavily amplifying all the nasty stuff your pickups are picking up. This is the nature of high frequencies.

Tight: We reversed the direction of the original Low control because it seemed ALL the best settings were with very little low end dialed in and the control itself was really a Tight control as it was. So now you turn it up to get a tighter tone. Can cut the mud out of any low tuning.

Power: The Electric Dragon features an onboard bi-polar power supply, so it requires 9volts ONLY!!! Higher voltage will only damage it.