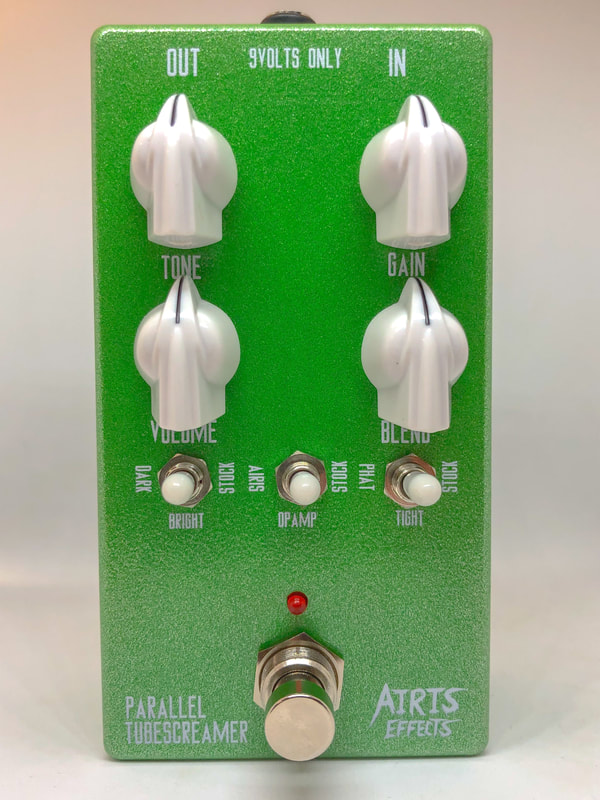 Everything you love, everything you wanted. Our new Parallel Tubescreamer is two fantastic pedals in one. We were able to mix a high output clean boost in parallel with an upgraded Tubescreamer circuit. We left the option to retain ALL of the original tones with the ability to blend in and change anything you would like. More or less low end, more dynamics, brighter or darker, more headroom, more crunch, better gain stacking and more.

Tone: Just like the original, this controls a high frequency shelf that lets you darken or brighten up your tone. The Bright toggle works in unison with this and changes the range in which the knob controls.

Gain: This adds some distortion to the tone, as well as more compression and output. The higher you go on this control, the more noticeable the difference in Clipping modes will be. Keep in mind you're going to get WAY more gain than a normal screamer so things can get pretty noisy, but it's all worth it.

Volume: Hopefully this one is obvious. Turn it up, things get louder. The further clockwise the Blend control is, the more overall output you will have. This will give you at least double the output that you would expect, so you don't need to start off at max.

Blend: At fully counterclockwise, this gives you a clean boost pedal that's only making your signal louder. As you turn it up, it blends the tubescreamer section in parallel. Once you get the control up to maximum, it becomes 100% tubescreamer.

Tight Toggle: This adjusts the low end going through your pedal. Tight will give you a very crisp sound that's perfect for lower tunings. Phat will add a bit of extra girth if you have a thin sounding guitar, or perhaps a very modern amp that doesn't need to be any tighter, just some aggression added.

Clipping Toggle: This changes the characteristic of the distortion/clipping. Opamp clipping will the loudest and least saturated. "Airis" clipping is very crunchy and can be used as a fairly pleasing distortion on its own!


NO!!! You can't run it at 18volts. Why? because we have incorporated a bi-polar power supply into the circuit that will give you more headroom and dynamics than any possible amount of higher voltage would, so not only is it not needed, but it will damage your fancy new pedal.