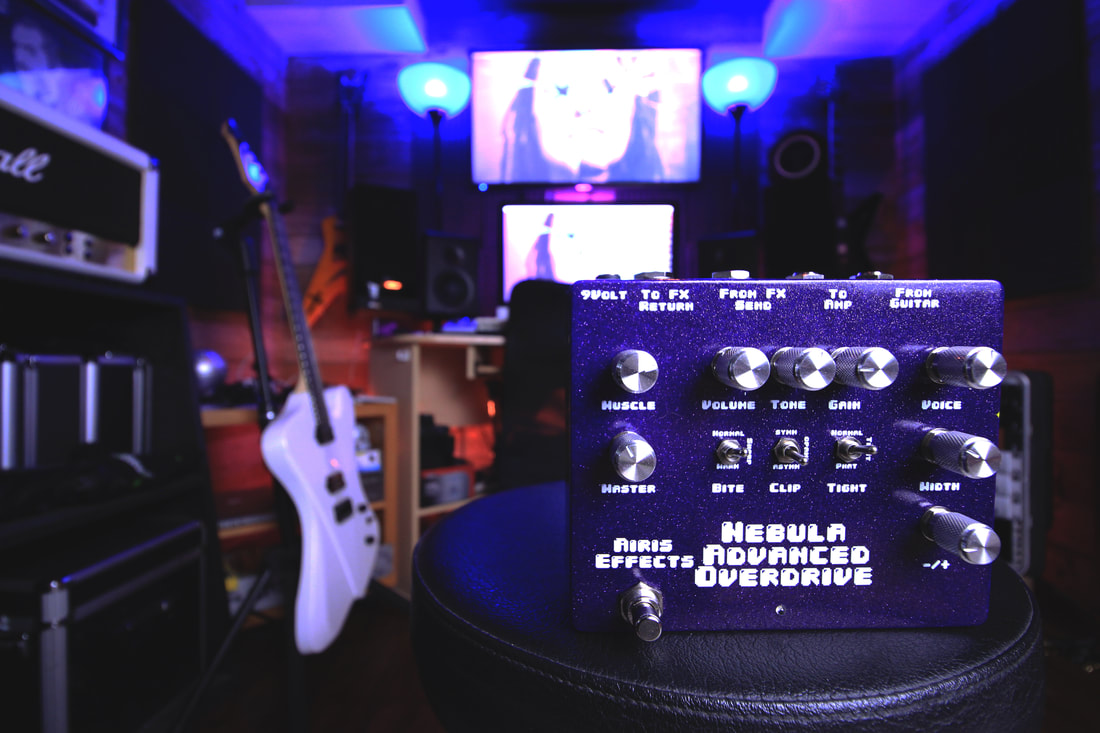 BUY NOW
Down to just a couple left!


The Nebula Advanced Overdrive is the next step in analog tone. The NAO allows you to sculpt your entire signal chain instead of just what’s going into the amps input. Think of it as a tool that "moves" all the warmth and low end that your cutting on the way into the amp to a point where it can be used to your advantage.

No longer do you have to sacrifice low end and fullness to get a tight aggressive tone from your amp, preamp or modeler. The NAO has been specifically designed for getting optimum results from your setup.

But the low end shaping is just the beginning of it.

For the drive section, we’ve started completely from scratch with a basic overdrive and then went absolutely off the wall from there!! Featured in the clipping section is a fully adjustable parametric eq. Unlike others on the market that can only sweep through a preset range with no adjustments of the level or Q, we’ve added our Target Mids parametric right into the overdrives signal chain. This allows you to not only find the sweet spot of your amps mid frequencies, but also lets you dial in just how squished and clipped those frequencies are.

After this, we get to a classic tubescreamer tone control, but with three selectable frequency ranges. This lets you fine tune any harshness brought on by aggressively boosting Mids or add even more bite.

On top of these things, there are also controls for Tight and Clipping with each having three positions.

Finally, the second stage of the NAO features its own isolated Muscle section. This gets placed in the effects loop in order to mold your low end, not destroy it. It can achieve this by working with your own amps design and filtering, allowing you to have a tight, biting tone but retain its warmth and thickness.

Voice: This allows you to sweep the corner frequency of your midrange and fine tune your guitar's signal to the amp you're playing. Some amps may seem too "honky" when using a boost or drive. This is easily cured by a turn of the knob. (Fun Tip: If you set the Q and -/+ controls fairly high and sweep the voice control back and forth, you can use it to help "tone match".)

Width: This adjusts how wide or narrow of a range the Voice control is effecting. Also known as the Q, which can be simplified as the amount of frequencies above and below where you have the Voice control set to. Lower settings can be used to make surgical eq cuts or boosts, while higher settings give you a much more aggressive range that will spit fire from a set of even lackluster pickups.

-/+: This lets you either boost or cut the frequency that the Voice control is set to by up to 12db.

Gain: This controls how much gain/dirt/distortion you get from the pedal. It's range is effected by not only the Clip switch, but also the -/+ control. This is a fairly high gain pedal. It stacks incredibly well, but adding tons of pedal gain to a high gain amp can get very noisy. Use it sparingly, or balance the gain between the amp and pedal.

Tone: This lets you cut or boost the high frequencies after the eq and gain controls. Allowing you to either smooth things out, add more bite, etc.

Bite: This changes the frequency range of the Tone control. The three modes will make even the most treble-happy players smile. Dial it back in the Warm setting to get a much smoother tone.

Volume: This is the overall volume of the overdrive section. It only effects the signal going into the amplifier. The Gain and Clip controls both play a part in the maximum volume the drive section can achieve. Experiment!

Clip: This three position control lets you change the gain structure of the pedal. Different positions will be preferable depending on the amp (or the day). With the Gain control at minimum, there will be almost no tonal change. Opamp will be considerably louder though. To notice the full effect, start with the Gain control around 9o'clock and adjust from there.

Tight: If you're on our website, you probably know what this one does. The three modes fine tune things to either be ultra tight for heavily downtuned/extended range guitars, "standard" tightness comparable to a screamer type pedal, as well as Phat that will help give you even more meat in standard tunings.

Muscle: This control is the centerpiece of the whole pedal. Normally when getting a very tight tone, you reach a point where it's either too thin or too cold and brittle. The Muscle control lets you dial back in all the meat that's lost on the way in. This retains all the bite, clarity and aggression that you're getting from the drive, and still stays sounding huge and warm. It's even capable of adding more low end than the amp currently has.

Master: This controls your overall amp volume. You can use it to balance your signal to unity with the pedal on or off, use it as a volume/lead boost, or even cut the volume back to reduce power amp distortion while leaving your preamp signal untouched. Another extremely important feature of this control is its ability to help dial in a high wattage amp's volume. Use the Master control of the NAO to gain some control over those touchy 5150 volume knobs!

The Nebula Advanced Overdrive is also the first in our lineup to feature Soft Touch Relay Switching. This not only helps minimize the pop found in standard true bypass pedals, but also gives a nicer feel to the switch, while having a lifecycle of around ten times longer. So your NAO will keep switching for years and years. If the two sides of your NAO ever get out of sync, just unplug it, plug it back in and the microprocessors will take care of the rest!

Hooking up the NAO: We promise this is much simpler than it looks, but you NEED an effects loop in order to use the entire pedal. It can be Series (aka Serial) or Parallel, with generally better results using Series. Follow the labels on the pedal carefully and you wont get lost!

Guitar/Drive Side: The FROM GUITAR jack is a cable that comes from your guitar. If you're using a tuner and/or noise gate, these can go in between the two. The TO AMP jack will go either directly to your amplifier's input jack, or to any other pedals you might be using into the amplifiers jack.

Effects Loop Side: The FROM FX SEND jack will connect to your amplifiers Effects Loop Send jack. If you're using a noise gate in your loop, we would generally put it between these two. The TO FX RETURN will either go to your amplifiers Effects Loop Return jack, or it may first make a stop at any of your delays, reverbs, modulation, etc. It should always be very early in the loop though, as it's playing a part of the preamp's voicing.

Power: 9Volts is what your pedal needs (2.1mm Negative tip DC). It can be run up to 18volts, but the difference will be very minimal.